a long-needed forum for students and practising scholars of Academic Donaldism in the South-Nordic area. 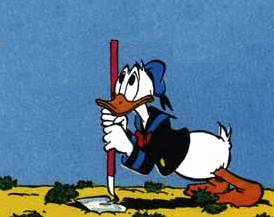 The art or science of Academic Donaldism can perhaps best be described as the opposite of Social-Constructivistic Donaldism (buuh!), where the stories from Duckburg are seen as nothing more than fictitious tales invented by human story-writers for our entertainment. In Academic Donaldism, we treat our subject with a complete opposite approach. We see the stories as written evidence of a real world inhabited by Ducks, Kynoids and other intelligent species unknown in our humanly dominated world. Written sources brought to us and beautifully illustrated by gifted men such as Carl Barks, Al Taliaferro, Floyd Gottfredson, Paul Murry, Al Hubbard, Vicar, Freddy Milton, Marco Rota, Don Rosa, Romano Scarpa, Branca, and several more belonging to a rare and fortunate brotherhood of blessed masters working as medias between the world of humans (Terra homines) and the world of Ducks (Stella anatium).

Or to put our basic philosophy in shorter terms: The Ducks are for real!

Based on this idea, the task of the scholars of Academic Donaldism is to study, analyse, evaluate and interpret the data brought to us in the Donaldistic sources, in the hope of being able to describe and perhaps even understand the world of the Ducks. However, this is not an easy task. Many of the stories show us things beyond earthly logic and understanding, some stories are internally contradicting, and some may even be false. Just as archaeologists and historians often have difficulties in understanding their data. But then again: If it was easy, it would hardly be any fun. And having fun is fundamentally what Academic Donaldism is all about. So please, join the fun! Or if you find us completely and insultingly stupid, then remember we come in peace and mean no harm: Don't take us seriously, we're only quacking!

However, you will probably find it hard to either enjoy or hate the academic life at our Academy, if you are not familiar with the Nordic tongue, as almost all the presentations are written in Danish - a rather peculiar and hard-to-learn language spoken by a small group of people in the southern parts of Scandinavia. When we have chosen this impossible language for the Academy, it is due to two reasons. First of all, it is our main aim to support the interest of Donaldistic studies in the South-Nordic area, as Denmark for too long has lain as a dry desert between fertile Academic-Donaldistic schools of Norway and Germany. Secondly, our original intention of translating the academic-donaldistic papers to a more international language has shown impossible. Our scholarly skills in foreign languages are simply to poor for the high level of Academic Donaldism! What this awkward attempt of a small presentation in English surely will prove.

Should any of our foreign students or guest-visiting scholars stumble over an article or discourse somewhere at this Academy, which they find potentially interesting, but impossible to read or fully understand, then please don't despair or leave the Academy in vain. Write us a mail  with your question or matter of interest, and we will try to answer your question or request in English. Should you wish to contribute to the research at our Academy with own papers or critics to already presented papers, you are more than welcome to do so - and please feel free to use any language you like, as long as it is either Danish, Norwegian, Swedish, German or English. The email-address to write to is: sydnordisk@yahoo.com.

The organisation of the Academy

South-Nordic Academy of Donaldism is build up by a number of research centres, faculties, institutes and departments, as you would find at most academies and universities. It is not possible here to describe the entire scholarly structure of the Academy, but we can give you a few headlines.

Among the research centres, the oldest and most developed is Faculty of Bearology, where the main subject are the mysteries of Brer Bear: Why is he sometimes nice and protecting the pigs from the Wolf, and why is he sometimes bad and hunting Brer Rabbit? Has he a split personality, has he changed through time, or are there actually more than one Bear?

Centre of Classical Donaldism (CKD) only exercises in the study of Donaldistic sources brought to us by four of the old masters: Floyd Gottfredson, Al Taliaferro, Paul Murry and Carl Barks. All other and later reporters are considered untrustworthy and uninteresting. You might find this scholarly view rather conservative, but just like in any other art or science, some sources or masters are considered more important than others are.

Our latest research centre is the North-West-Jutlandic Institute of Modern Donaldism (NINA), and as you might have guessed from the name, the scholarly view here is quite different than from the centre mentioned above. For instance, one would expect a modern master of Donaldism such as Don Rosa to pull a high rank in the studies here, but as the centre has hardly opened yet, we will have to wait and see.

One of the major research institutes at the Academy is Institute of Donaldistic Physics and Geography. At the moment, only the Department of Donaldistic Temporal-Studies is active, but in the semesters to come, both the interesting field of Donaldistic Geology and the big, essential question of "Where is Duckburg?" will be taken up. As a beginning, the Academy recently opened a Centre of Donaldistic Ethnology to promote academic research on species and races in the Anatide world.

The probably most visited of all our institutes has without doubt been the Institute of Donaldistic Sexology. Why this is, we do not know. The institute is lecturing and researching in everything concerning the sex life of the Ducks and other inhabitants of Duckburg (and The Forest outside of Duckburg) - or the lack of sex life, as most of the written evidence apparently would like us to believe is the case. Also the Donaldistic genealogy and gender studies are situated here.