From Duckburg to Venice 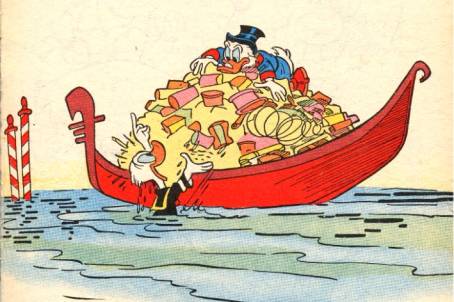 Just before my arrival here at the Academy, Dr Gjøgsig could report of a sensational new Norwegian thesis on the location of Duckburg. A scholar by the name of Mr Diff had introduced the use of lunar astronomy in donaldistic-geographical studies, and based on observations of lunar phases and ditto inclinations as well as measurings of the moon’s position over the horizon at the same time seen from Duckburg and Venice, it was the conclusion of Mr Diff that Duckburg had to be situated quite close to Venice, probably a little south of this somewhere on the northern half of the Italian Peninsula.

Being an Italian donaldist myself, I would of course very much like to support this idea, but unfortunately, I am scholarly obliged to dismiss the thesis, as it is clearly contradicted by other sources brought to us by some of the most trustworthy reporters in Donaldism.

My first exhibit is duckumented by Romano Scarpa back in 1963 (TL 406 and JB 6). After listening to his neighbour’s boring brag about a vacation to Mallorca, Donald tries to shut him up by claiming that he himself is about to leave for a vacation in Venice. 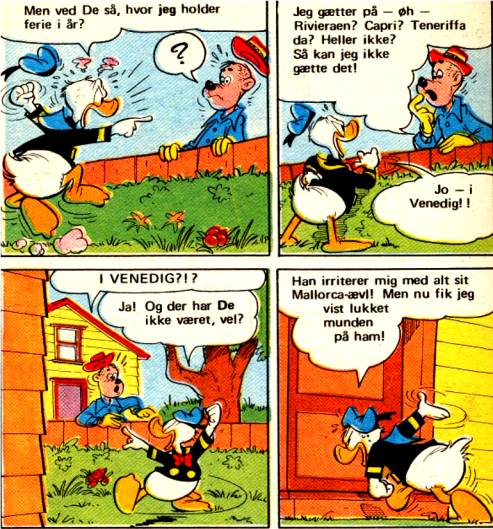 Apparently, going to Venice for your vacation is something that has a very impressive ring to it. Much more impressive than simpler places such as Mallorca, the Riviera or Capri. It is not just the annoying neighbour, who gets impressed. The rumour of Mr Duck going to Venice soon hits the streets of Duckburg. 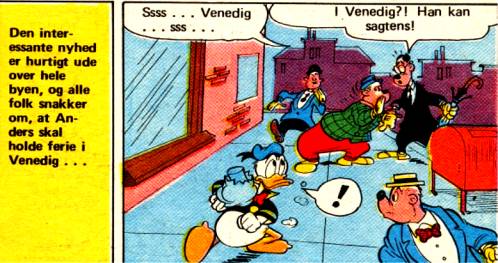 Indeed, it even makes it into the newspapers! 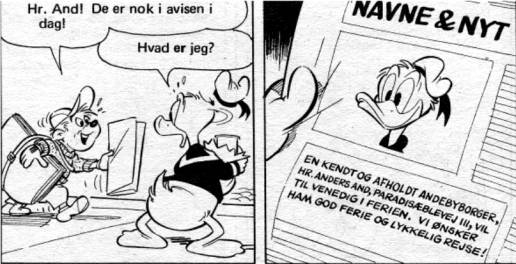 I personally find it very hard to imagine that such a fuzz could be created, even in Duckburg, if the destination of Donald Duck is situated in the immediate vicinity of Duckburg.

The fact that Donald and Scrooge go to Venice by aeroplane furthermore speaks against the idea of the two cities lying in the same region. 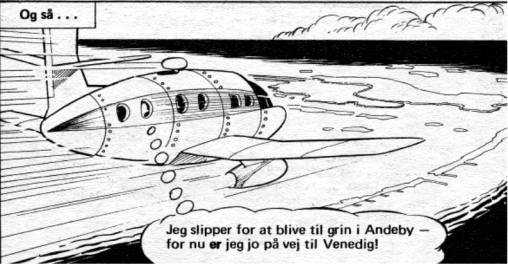 Of course, it is possible to fly between two neighbouring cities in most places, but when the Duck to pay for it is called Scrooge McDuck, a cheaper means of transportation is more likely to be chosen - if at all possible. 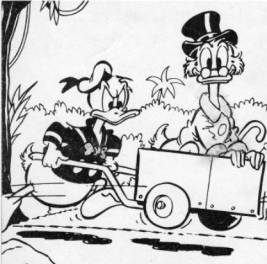 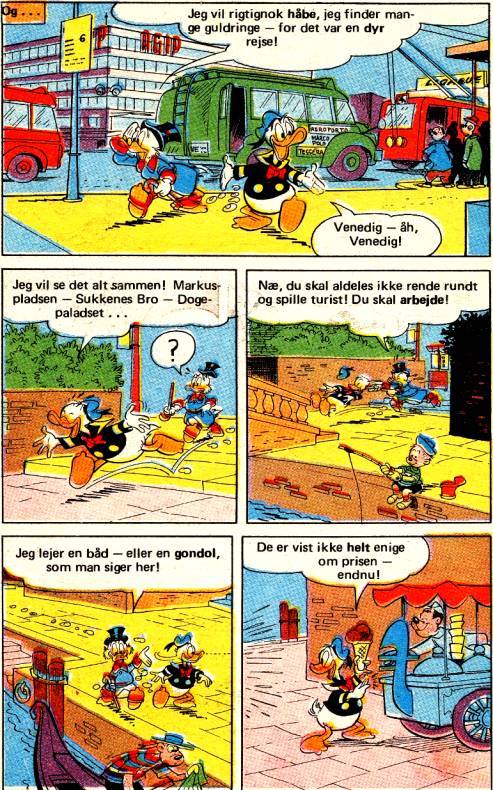 The exotic character of Venice for someone coming from Duckburg is even more distinctly detected with Donald: »Venice -oh, Venice! I want to see it all! Piazza San Marco, the Bridge of Sighs, the Doge’s Palace...«. And being the well-prepared tourist, Donald knows that one of the most important “Things to do when in Venice” is to get yourself a big Venetian ice cream.

However, as extraordinary a trip to Venice would seem to Mr Duck, the visit reported by Scarpa in September 1963 was not the first Venetian vacation for our famous Duckburgian. Indeed, just three months earlier (i.e. in June 1963), Carl Barks duckumented a rather breath-taking appearance in the city of gondolas by Donald and his nephews (WDC 273). The fact that Donald still is so eager to see the sights of Venice, in spite of the fact that he has been there so shortly before, is not all that surprising, since his first stay was a bit hasty, to say the least.

As all donaldists will know, Donald’s first stay in Venice is slightly prolonged compared to the rest of his travelling group, as his wish to take a snapshot at Piazza San Marco costs him a few seconds and a fatal separation from the group. 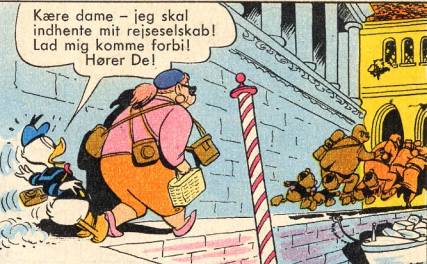 This classic Barksian duckumentation not only supports the fact that Venice is a rather exotic tourist location for people from Duckburg, and therefore not likely to lie close-by. When Donald is left behind by his group, he decides to rent a car in order to catch up with them in Geneva: »Otherwise, this trip will be my ruin!« 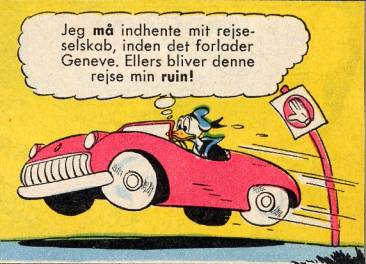 Now, IF Duckburg, as suggested by Mr Diff, is located somewhere relatively close by and south of Venice, then it makes no sense at all that Donald is so eager to go north in order to get home without causing himself an economical disaster. Admittedly, quite a lot of Mr Duck’s behaviour makes little sense, for instance well illustrated by his decision to take the high road over the Alps instead of the easier and faster way through the tunnel...

..but still I would like to give him the credit that he would not put himself in such a backbreaking crossing of the Alps in the north, if he could indeed just take the bus or the local south-bound train back home to Duckburg.

Both the duckumentations by Scarpa and Barks, to my mind, strongly proves that Duckburg is NOT located somewhere close south of Venice. On the contrary, they both indicate that we should look for Duckburg at some considerable distance from Venice. Probably even on an other continent.

But then what about the Moon and the otherwise so convincing lunar proof of Mr Diff? Well, I have given this problem a lot of thought, and I can only come up with two possible explanations. The first possibility is that we perhaps have more than one moon over Stella anatium! In this way, the moon seen from Duckburg can look alike or differ from the moon over Venice without this indicating anything about the internal position of the points of observation. However, we always only hear of one moon (the Moon) over Stella anatium, so I do not think this is a plausible thesis.

Personally, I am more inclined to point to my second explanation. Now, I should stress that I am in no way an astronomer, and so my knowledge of lunar inclinations and phases is sadly limited, but I would, however, expect that the interpretations made by Mr Diff are quite dependant on the assumption that Stella anatium, like planet Earth (?), has the form of a round globe. A somewhat different system of comparing lunar observations probably has to be considered for Stella anatium, as their world - so memorably discovered by Goofy Columbus in 1492 and duckumented by HectorAdolfo de Urtiága in 1977 - is indeed completely flat! 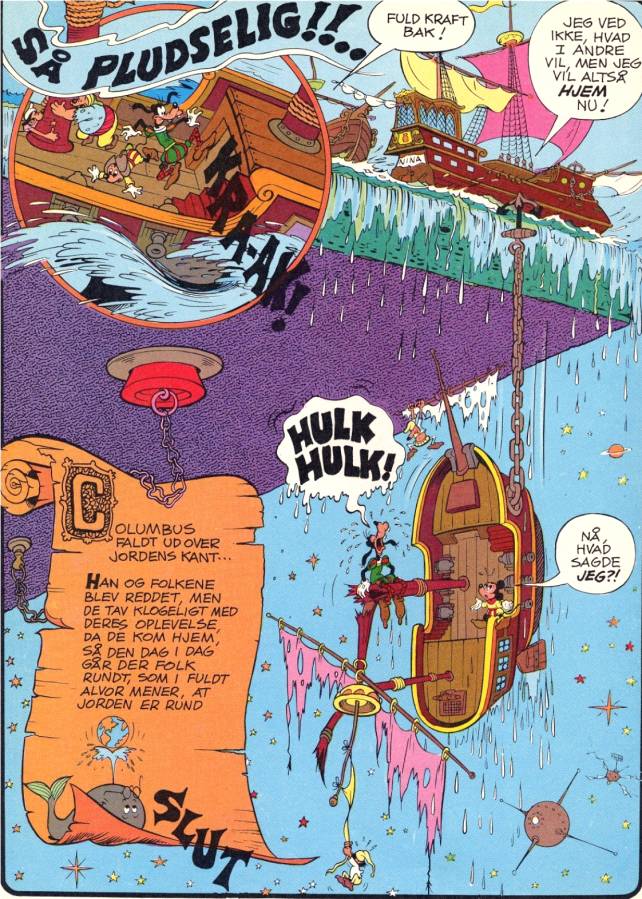