Gus still got it 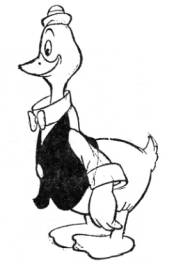 It is a very great honour for me to be invited here at the Christmas Party at the Centre of Classical Donaldism (C.K.D.) as its first official guest speaker from outside the centre. Also a big thanks for the fine food and beverages - the Duck a l’Orange was simply delicious. Please, feel free to try the spiced-up Christmas cookies that I have brought along for the party from my home country; I think you will find them interesting and most mentally stimulating.

Now, when I was invited to give a paper here at the C.K.D., I took the liberty to look at earlier speeches given at this occasion. And here, I was very impressed by the paper given by Dr GrandjeAnd back in 2003 on the youth-days of Cousin Gus.

In fact, I was so inspired by this paper that I decided to humbly follow in its path with a small, supplementing survey on the ways of the more grown-up Goose.

For most people, the most obvious talents, if they can indeed be termed as such, of Cousin Gus, would be his insatiable appetite and his unlimited capacity for sleeping. 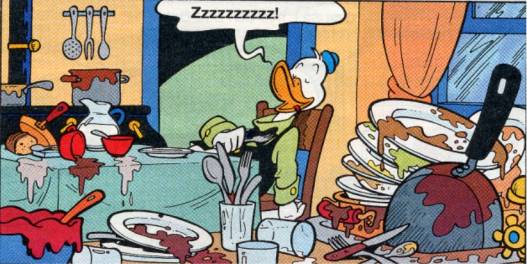 However, as pointed out by Dr GrandjeAnd, the young Gus Goose shows two other interesting sides, which unjustly have received almost no attention among Donaldistic scholars. Firstly, young Gus is quite a “Ladies’ Man” (or rather, a “Ladies’ Gander”), who among others often puts a sweet smile on the beak of Daisy Duck. And secondly, Gus has a rare, innovative skill, probably only matched by Gyro Gearloose, but with much simpler means than the famous Duckburg inventor, Cousin Gus time and again succeeds in constructing clever work-saving gadgets. 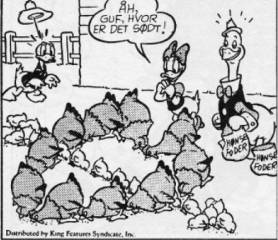 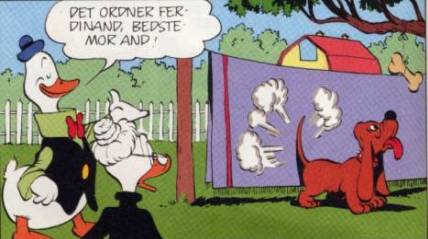 The traditional accusations against Cousin Gus of being lazy are - in my eyes - not all that unjust, but I agree with Dr GrandjeAnd that we should not ignore the positive effect of Gus’ laziness, i.e. his impressively creative resourcefulness. Another Classic-Donaldistic example of this is brought to us by Paul Murry, where the very words of Gus reveals the core essence of his personality and way of thinking: »There has to be an easier way to do this! There has to be!« 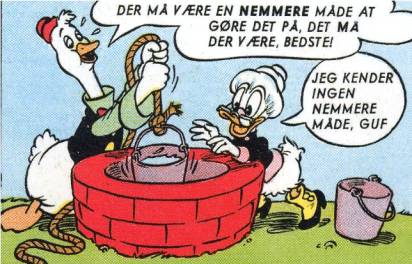 Grandma Duck, although quite skilful herself, does not know of any easier way to haul up water from the well. But soon the ingenious Goose comes up with a creative and effective solution.

Lazy? Perhaps, but is it not the thinking of “lazy people” like Gus Goose that is the founding-stone of all technical development? “Work smarter, not harder”.

But does he still have it? Can Gus Goose still sweep the girls of their feet, and is he still as innovative as when he was young? Or has the mature Gus concentrated on his more traditional talents: Eating and sleeping? That is the topic of today’s paper. To answer this question, I will do something rather unheard of in these halls: I will expose the esteemed scholars of C.K.D. to non-Classical-Donaldistic material! Indeed, it is a duckumentary published only recently in Danish Anders And & Co. (AA 50/2005) from two of the leading reporters of present-day Donaldism: Lars Jensen (text) and Santanach (pictures).

In my opinion, the main theme of the story touches something very essential about Gus: His ability to avoid work! Grandma Duck is sick, and the invoked Ducklings try their utmost to make the Gander put in some physical effort, but such a provocation is exactly what it takes to make his true talent blossom. In stead of going to the hen house and collect all the eggs himself, Gus - in a surprisingly short amount of time - trains the fowl to walk a plank from the hen house through the kitchen window and pop out their eggs into a basket in the kitchen sink. 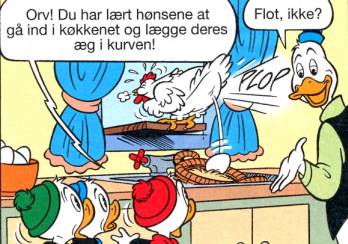 It is hard to argue with Gus’ own evaluation of his accomplishment: That is pretty neat! But shortly after he exceeds himself, as he manages to make a pot plant simultaneously clean the window, dust the furniture, sweep the floor, and stir a pot on the stove just by playing a multi-functional snake-charmer whistle invented by his good friend Gyro! One understands the astonishment expressed by the triplets.

So, Cousin Gus most certainly still has his smarts when it comes to work-avoiding ingenuity. But what about his other youthful skill? How is he nowadays with girls?

The answer is given in the very same duckumentary by Jensen & Santanach. The two young and attractive neighbour-daughters, Rikke and Karen, have obviously heard that old Grandma Duck is sick and lying in bed, and they rush off in their dad’s truck to the neighbouring farm. To see how Mrs Duck is? Not quite. Rather to benefit from her not being able to keep an eye on her handsome helper. Still entering the farm yard in full speed, one of the daughters leans out the truck window and greets Gus with the most invitational smile: »Hi Gus. Wanna go for a ride?« 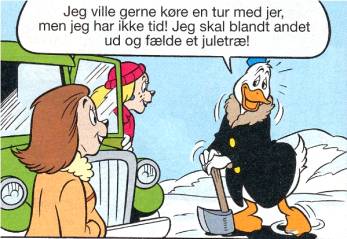 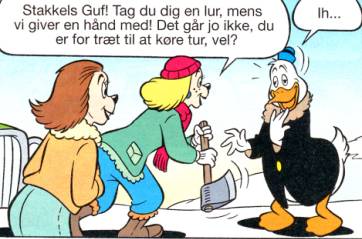 Apparently, Gus, that old charmer, succeeds in making one of the girls do his tough tree-cutting work. And why? Because they do not want him to be “too tired for the ride”?!? What kind of a “ride” are we actually talking about here? Well, according to my sources in the international transport environment, there is an old saying among truckers concerning taking up passengers of the opposite sex: “A ride for a ride!” Now, maybe I am reading more into the actual dialogue and behaviour of the girls than what is truly going on, and maybe it is a completely innocent type of ride that Rikke and Karen want Gus to be ready and fresh for, but still, there is no avoiding the conclusion that Gus Goose most evidently still knows how to charm the young ladies.

As most of you probably know, my main field of Donaldistic research is Anatide pharma-toxicology - or to put it in lay terms: The Ducks’ use of drugs. And in the case of Cousin Gus, as you will also know, we do indeed have an interesting thesis involving drugs, namely the sensational thesis presented in 2003 by the esteemed Norwegian scholar Mr Mats, who not only suggested that Gus could be the father of Huey, Dewey and Louie, but also that Grandma Duck deliberately could have erased his (i.e. Gus’) memory of all this by putting “something funny in his cakes”, as Mats did not find it unlikely that the old Duck matriarch could be growing »..something illegal and severely mentally retarding in the back yard.«

During my stay here at S.A.D., I have been asked several times for my opinion on this provocative thesis of Mr Mats. Well, firstly, I would say that I do not find the thesis in conflict with any of my studies on Donaldistic drug-use. In fact, I would even agree with Mr Mats that it is far from being unlikely that Grandma Duck is growing illegal herbs in her garden meant for the production of drugs. Personally, I have always wondered how her farm could function economically, as the production strikes me as extremely ineffective and unprofitable; especially her keeping of pigs puzzles me, since it is very hard to imagine any slaughtering going on at the farm  - and I don’t recall ever seeing the Ducks eating pork? Therefore, a supplementing source of income at Grandma Duck’s Farm in no way seems unlikely. But is it drugs? Here I will have to emphasize that I have never found any actual evidence in support of such a suspicion. In stead, I have come over accounts of an other possible explanation in support of Mr Mats’ thesis of Grandma Duck messing with Gus’ mind.

Another non-classical, but otherwise quite well-reputed reporter, Tony Strobl, brought to us back in 1957 some rather interesting pictures of Grandma Duck hypnotizing Gus with astonishing - nay, almost shocking - effect. With a firm look, she gets complete control over his mind, and the poor Gander instantaneously finds himself a mere slave of his mistress’ will. Certainly, with such abilities at hand (and eye), Grandma Duck could easily have erased any unwanted memories in her helper’s mind.

Actually, I even find the duckumentary of Strobl mind-messing myself in relation to another provocative Gus-thesis raised in Early Academic Donaldism by the notorious Dr Grobian Gans. I am of course speaking of his claiming a probable sexual relationship between the mature she-Duck and her young male-servant.

I know that this is a thesis, which most donaldists find unbelievable as well as unpleasant, but as serious scholars, we must keep an open mind and a neutral approach to the interpretation of the evidence, and who knows what the old widower might do with her young Gander when he is under hypnosis? Apparently, he does not even recall it himself, when he wakes up completely exhausted and with a sore back - while old Grandma Duck is in a joyful mood. 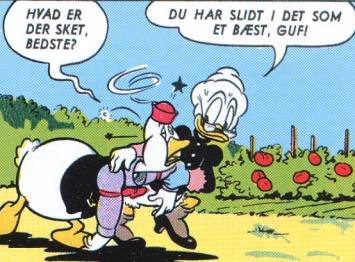 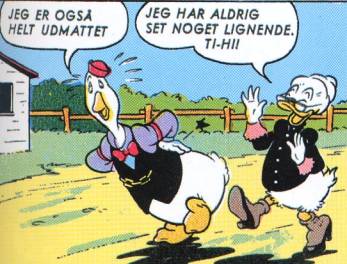 And so, it is not necessarily without its problems to be a good-looking guy - or Gander - with high popularity among women...of all ages. No wonder Gus has a healthy appetite and needs his occasional nap under the tree or behind the hay stack. Because whether he likes it or not, Gus still got it!