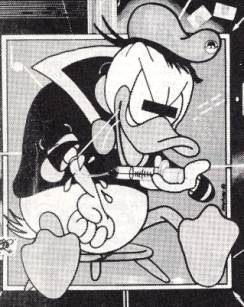 Just before my beginning as a guest professor here at South-Nordic Academy of Donaldism, a graduation - or rather, an attempt to graduate - as a Master of Donaldism (M.D.) took place in these learned halls. The candidate, Mr. Palle Damgaard, had most fruitfully brought to attention the disturbing fact, that sudden fainting seems to be rather common in Duckburg, at least according to some Donaldistic reporters and publications, and especially for two well-known members of the Duck Family: Donald and his Uncle Scrooge.

Young Mr. Damgaard cautiously suggested atmospherical pollution in Duckburg in general or within the money bin of Mr. McDuck in particular as potential explanations for this peculiar phenomenon, but in spite of his most thorough and systematic investigation he still found it uncertain to conclude anything for sure - maybe due to exam nerves and too much academic humility? No such restraints, however, seemed to trouble his evaluators and audience, as several - often quite creative and internally conflicting - theories of explanation were given after Damgaard’s presentation.

Still, the most obvious reason for the numerous faintings in the Duck Family has to my surprise been neglected. Maybe because it is also the perhaps most unpleasant explanation of them all. Nevertheless, when you look at the facts scientifically, there is no avoiding the conclusion: The Ducks are on drugs!

I present for you exhibit 1 (the picture below): One beautiful day in Duckburg, Donald is taking a stroll downtown together with his nephews, when all of a sudden, he starts feeling dizzy, his legs begin to shake and it blackens before his eyes. Luckily, Donald’s nephews are prepared, they know the symptoms, and they catch their uncle before he hits the pavement. They know what is happening, and so does their uncle, who tells them: »There is only one thing to do!« »What?«, the nephews ask, and the answer is written on the wall: »DRINK GURGLEURP!« (“Brusevand” på dansk, red.).

Drink Gurgleurp?? Now of course, the presented reading of the episode is completely false. If any of you are familiar with the actual story from which the scene is taken (TL 1071), you will know, that Donald’s fainting is due to a chock provoked by a humongous inflation on vegetable prices, and the appearance of the Gurgleurp® poster in the background is totally coincidental. Or is it?

Truth is, that Donald Duck, bad physical condition and Gurgleurp® go back together a long time. In 1964, Carl Barks brought us revealing, but certainly not pleasant pictures from an apparently normal day in Donald Duck’s life (WDC 282-03). He’s been sitting all day at a bar, drinking heavily a new trendy beverage called Gurgleurp® (“Boblesquash” på dansk, red.). And the result is frightening.

Donald is half unconscious, apathetic and only barely in contact with the world around him. His head is spinning, and by the look on his face, he is having a bad trip. Huey, Dewey and Louie are looking concerned with good reason. 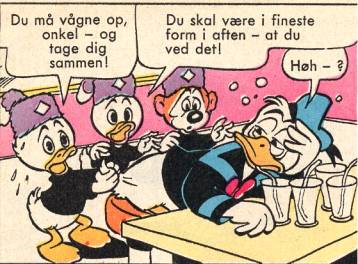 What the heck is going on with Uncle Donald? Officially, the sad condition of Donald is caused by the consumption of at least four glasses of Gurgleurp®, apparently an innocent soft-drink product with high contents of sugar and carbondioxide. But who ever heard of an innocent soft drink that could put a grown Duck to a state like this? The consumption of Gurgleurp® has not just made Donald noxious. Not only is he evidently mentally influenced and losing touch with reality. His entire body strength has left him. 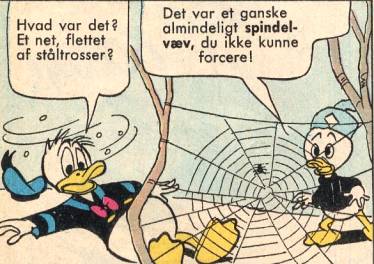 Unfortunately, this time the exhibit is NOT a construction. Donald Duck’s appalling physical and psychological condition in 1964 is only too clearly caused by an abusive addiction to the mysterious product Gurgleurp®. But what is Gurgleurp? Apparently, in 1964, it was not known in the neighbouring city of Goosetown, and the violent effect of a heavy dose on a first-time user is seen below, where an athletic Goose champion in perfect physical condition is brought to the floor in few seconds. Whatever Gurgleurp® is, it is certainly no soft drink. This is heavy stuff! 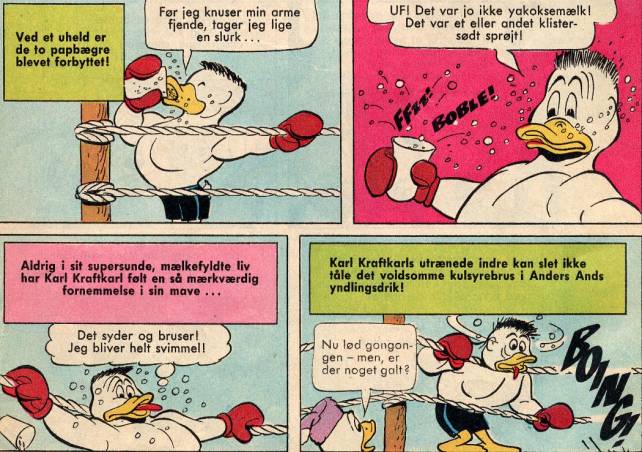 Now, this whole incident could be put aside as a curiosity, if it wasn’t because of the fact, that Donald’s addiction to Gurgleurp® is by no means a one-time mishap. His unhealthy longing for the sweet drink, and his physical uncomfortability, irritation and lack of concentration when he doesn’t get it, has been proven only too often since 1964. I am sure, all the young students present will recall the revealing episodes during Donald’s trip to the Island of Myths, reported less than two years ago (bl.a. AA 36/2003). 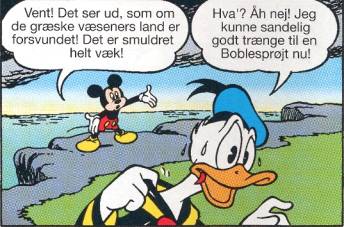 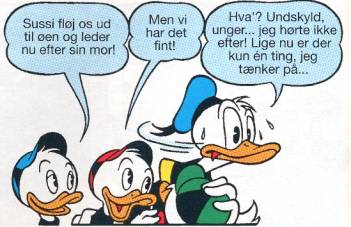 Donald Duck is on to something. And by the looks of it, it ain’t no good. Of course, I am not the first one to bring this matter to the attention of Donaldistic scholars. My esteemed German colleague, dr. Michael Machatschke (former president of D.O.N.A.L.D.), addressed the whole Gurgleurp-scandal as early as 1983. According to Machatschke, sugar and carbondioxide alone couldn’t be the explanation of the effect of Gurgleurp: »Rather, it seems as if we are dealing with substances, that are usually not connected with lemonade, nor should they BE connected with lemonade! Only more so, as Gurgleurp seems to contain some sort of drug or narcotics (...) which are leading to addiction.« Indeed, dr. Machatschke dared not even reject the repellent thought, that the manufacturers of Gurgleurp® on purpose should have added some kind of illegal ingredients to their product, just as unscrupulous cola producers of our world experimented with cocaine some years back (in the cola, that is!). However, Michael Machatschke found it hard to identify the unknown drug in Gurgleurp® as cocaine, which usually gives the user a strength-enhancing effect, most popular in recent years among football players and pro-cyclists. This is certainly not the effect on Donald, who cannot even break through the web of a spider. In his dissertation of 1983, dr. Machatschke suggested alcohol to be the most likely answer to the secret of Gurgleurp® - and hence to Donald’s motion problems.

In my opinion, the Donaldistic sources point to a much more plausible explanation. Once again, our man on the scene is Carl Barks. In 1962, he brought to our knowledge yet another fantastic documentary with huge importance for our understanding of the Anatide universe: The tale of the nutmeg tea (US 39-02). After a long day at the money bin counting coins, old Scrooge McDuck begins to feel fatigue, and he decides that it is time for the high light of the day; his tea break. A cup of fresh-made nutmeg tea shall do him good, and make him able to continue for several hours more of counting money. With a sweet smile of expectancy, Scrooge puts on the kettle. 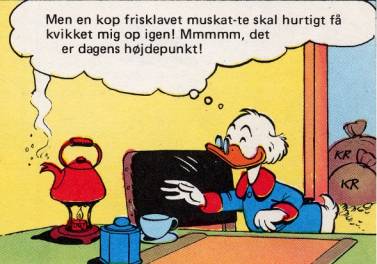 All very innocent. Or is it? Seconds later, when Scrooge realises, that his supply of nutmeg tea has run out, and - even worse - his supplier has cut him off, the scenery immediately turns quite ugly. 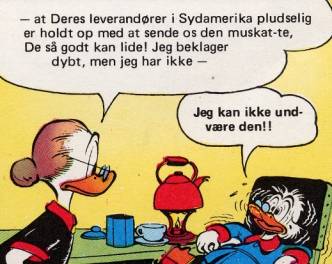 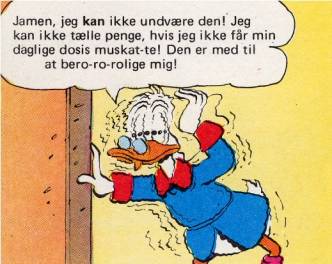 Scrooge is evidently hooked on the stuff! He cannot do without it. Scrooge’s extraordinary ability of making money, and hence the basis of the entire McDuck Empire, seems dangerously close linked with his usage of nutmeg.

Of course, Scrooge McDuck is not the Duck to let his world collapse because of greedy (or rather: lazy) dealers. He personally sets off to South America (!), where the wonderful plant is growing, to steal a sufficient supply of nutmeg nuts from the rightful owners of the dreaded Cura de Coco tribe. It is interesting here to note, that Scrooge wants to keep his trip to South America and the purpose of his journey a strict secret. The reason is not, as one might expect, that he is ashamed of his addiction and afraid of social condemnation or scandals in the medias. No, his fear is of a much more material and concrete nature: If someone was to find out about his addiction, they might buy up the entire market and make him pay an enormous price for his indispensable drug. 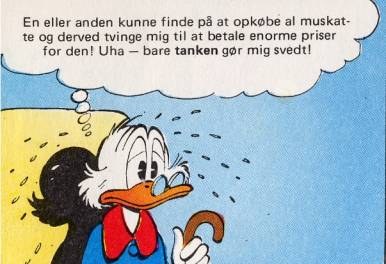 And so being revealed as an old, pathetic drug addict, shaking like a leaf when he doesn’t get his stuff, it can be no surprise, that this old Duck time and again faints at the slightest emotional disturbances. As pointed out by Dr. Kopfschmerz, Scrooge McDuck is too cheap to allow himself to eating and drinking sufficiently for a Duck of his age, just as he is most likely to not get enough sleep. His main source of energy is the stimulating ingredients of the nutmeg tea, and even though his old body is tough even by Duck standards, and it has become even more so during a long, indurating life, there must be a physical limit to this neglective way of life. There is always a price to pay. And Scrooge McDuck is paying it by repetitive, physical blackouts.

Apparently, Scrooge McDuck sees no moral problem with his unhealthy use of drugs. As shown, he feels no shame about it - only fear of being exploited - but what is even worse, he does not think twice about passing his filthy habit on to his young relatives. Even though he is aware of what the use of nutmeg has done to himself.

On the contrary, when Scrooge feels secured of his own lifetime supply, the idea immediately emerges, that he could make a fat bundle on creating a market for nutmeg tea in Duckburg. And thereby turning the good people of the Anatide metropolis into addicts of a drug under his market control. 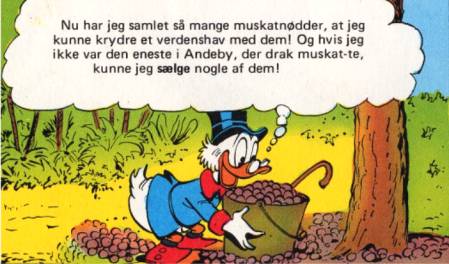 In fact, as the idea of introducing nutmeg in Duckburg came to Scrooge in a Barksian documentary from 1962, and the first known case of Donald’s sad addiction to Gurgleurp® was reported in 1964, it is not at all difficult to imagine, who might be the manufacturer of this effectively commercialised and habituative soft-drink product in Duckburg. Nor should it any longer be a mystery, what the secret ingredient of Gurgleurp® is.

So, Donald Duck does not, in more than one sense of the term, have his habit from strangers. Not only is he sharing it with his Uncle Scrooge. The nice uncle might even prove to be the one responsible for and profiting by his nephew’s drug addiction! And, hence of his repetitive fainting. It is running in the family, just like the drugs. Quack, indeed!