Profile of preferences of Donald Duck when womanising 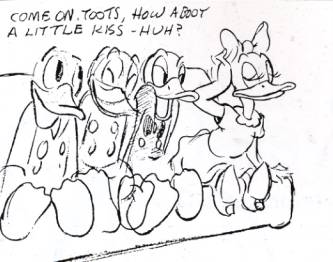 Sex in Duckburg has always been one of the hottest topics in Donaldism. ‘Hot’ in more than one sense of the word. In the early years of academic Donaldism, it was even debated, whether sex in fact did at all occur in Duckburg? Soon, when most scholars agreed that even Ducks must have sex, it was claimed that Donald Duck then was a sexually neurotic case with deep psychotic problems, which meant that he could never have a normal physical relationship with a woman - including his girl friend Daisy (Gans 1970, Imberger 1979, van Erpelt 1980, Zarnack 1981). Several scholars have for long presented solid facts against these horrific claims of Donald as a non-sexual psychopath (e.g. Grütz 1982, Wilkens 1982, Oldigs 1982), some of them even over-compensating by painting a picture of Donald as a hyper-sexual psychopath.

In this paper, given on the occasion of the long-awaited re-opening of the Institute of Donaldistic Sexology at S.A.D., I will dismiss both of these misleading views. In stead, I will claim that Mr. Duck in fact is quite normal - at least in the matter of his sexuality - and that he has a sound and in no way abnormal interest in the opposite sex. And to support this claim, I will in the following try to present a profile of preferences of Donald Duck when womanising.

The true love of Donald Duck is Daisy. In fact, for all we know, Donald never had a romantic encounter at all before his meeting with the beautiful Miss Daisy one fatal day in November 1940 (or at least documented to us at that time). 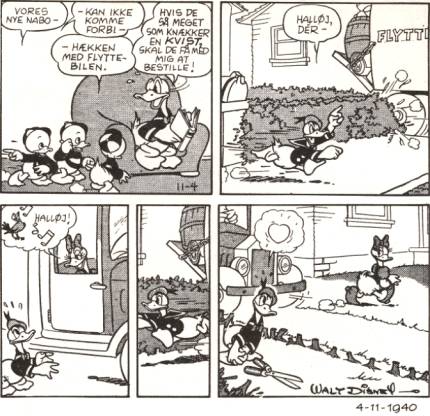 Clearly, Donald’s feelings for Daisy are in no way unrequited, but as the love game goes, Daisy does not refrain from using her youth and beauty to flirt with other available bachelors. Partly to keep Donald on his toes, partly to see if she could perhaps do better. Curiously enough, one of Daisy’s first flirts is Cousin Gus. Many Donaldistic scholars have found this hard to understand, but as shown by dr. GrandjeAnd (2003), Gus was quite a ladies’ man in his young years, and furthermore it seems as if female Ducks in general find male Geese (i.e. Ganders) physically attractive (and so, also in Duckburg the old saying is true: Size does matter!) 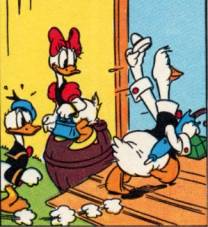 The flirt between Daisy and Cousin Gus is soon followed by a much more serious challenge from another annoying cousin of Donald’s. 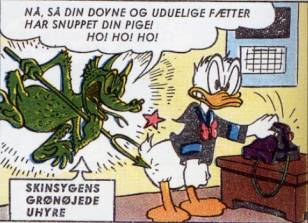 On top of that, Donald constantly has to compete with Daisy’s taste for big, muscular guys. Especially well-proportioned males of the Kynoid species seem to bring a distant, moist look in her eyes. And such Kynoid beefcakes are hard to match, when you are just a small, white duck. 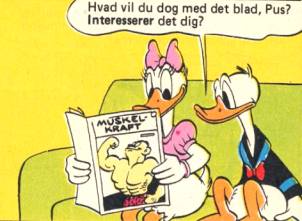 But to be fair, Donald is by no means a saint himself. A classical proof of this is the legendary flirt at a spring picnic with miss Swansdown-Swoonsudden, where it is a quite particular kind of ‘flower’ Donald is aiming to pick. 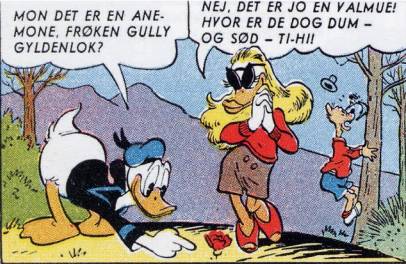 Back in 1943, young Donald’s main reason for taking the job as lifeguard at Duckburg Beach explicitly was to meet chicks - or rather young she-Ducks - and to our great surprise, he actually succeeds. To an almost breathtaking degree. 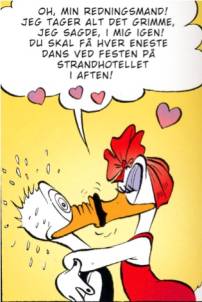 One might ‘excuse’ these early womanising escapades of Donald by his youth, and claim that at this point his relationship with Daisy still had hardly begun. But also in later years, Donald is often infatuated by young attractive she-Ducks.

And when Womanising Donald is on the move, he lets no-one stand in his way. Not even Daisy.

In fact, Donald does not even refrain from shameless flirting with Daisy’s girl friends, right in front of Daisy at the dinner table in her own home! 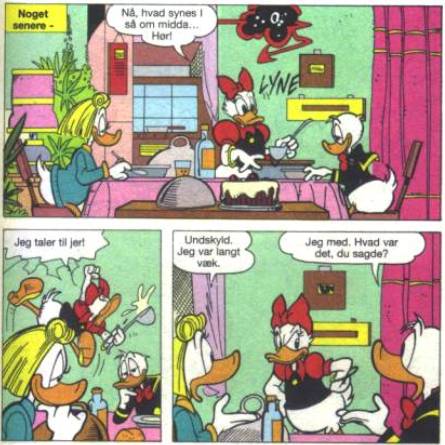 This kind of behaviour has recently led professor Dam (2005) to suggest the existence of a “parallel lovelife” and even a “parallel double-monogamous lovelife”, which according to the professor is quite widespread and socially accepted in Duckburg. Certainly, it is very acceptable in Donald’s dreams, where he is not only a powerful and popular magnate, he is also quite a magnet for sweet looks and wishful fantasies from many a young fair maiden. 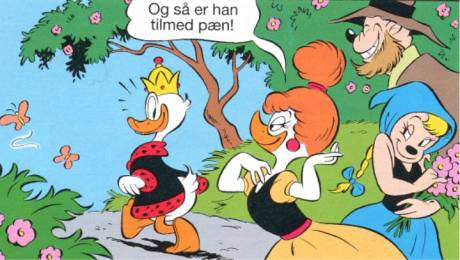 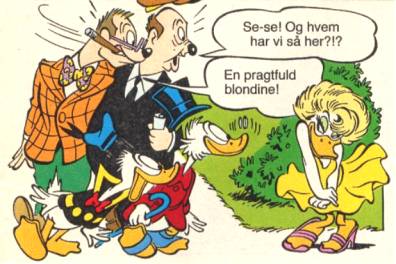 Meanwhile, unlike Daisy’s taste for muscular Kynoid males, Donald never seems to get the hots for a Kynoid female. On the contrary, he appears quite repulsed by such ideas. 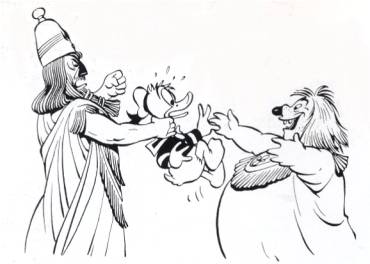 This is not a behaviour restricted to Donald, as his Cousin Gladstone displays exactly the same preferences - and anti-preferences. 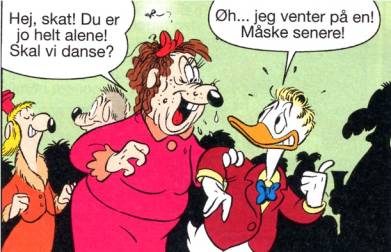 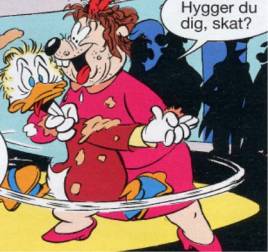 Apparently, Donald’s and Gladstone’s ancestors were less discriminative. When the famous viking Donald Ironbeak came to America, he did not mind too much the political and arranged marriage to the chief’s daughter Nookipontas. Then again, it should be noted, that she appears more Humanoid than Kynoid. 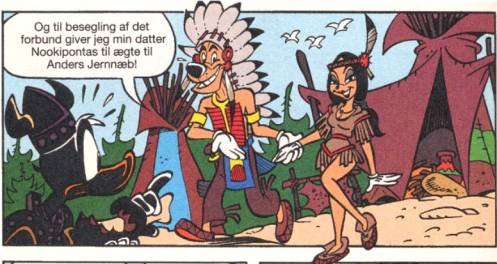 Also, the alternative awaiting Donald back home should probably be taken into consideration.

It is, however, an undisputable fact, that Donald Duck has a keen eye for females outside of his own species - but only Human ones. 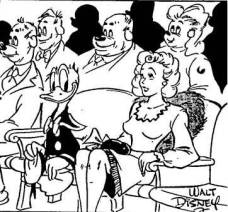 Just looking at them puts a happy smile on his beak. 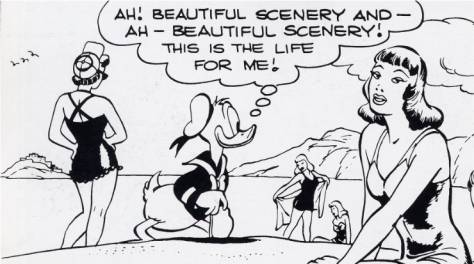 But whenever he tries to get any closer than just looking, the problems begin. He never seems to have much luck. 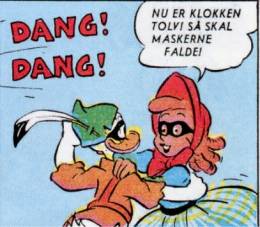 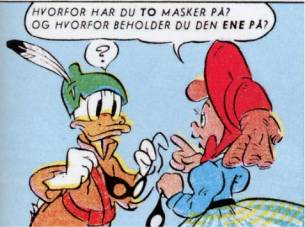 No luck at all. 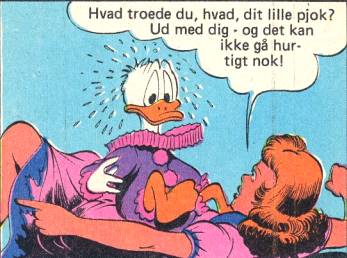 In fact, judging from the empirical evidence, one could claim, that his prospects are down right hopeless. 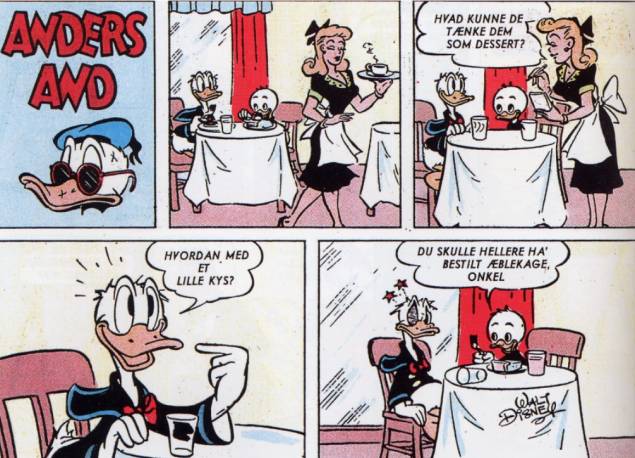 Why this is, is a bit of a mystery to Donald. Even consulting the wisdom of the old learned masters does not seem to bring much light to the matter. 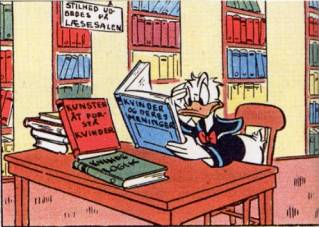 Of course, it does not help that Donald’s girl friend is doing all she can to obstruct his potential encounters with hot Human females.

Both at home and out on the town.

This defensive behaviour from Daisy only goes to show, that all flirts aside, she is indeed Donald’s number one girl. And so the object of his most romantic attention. But even though Daisy does not want Donald to court anyone else, she is not always herself in the mood for his sensual advances, which she has learned to put an effective stop to by always having the right equipment at hand. Such as a plunger in the kitchen... 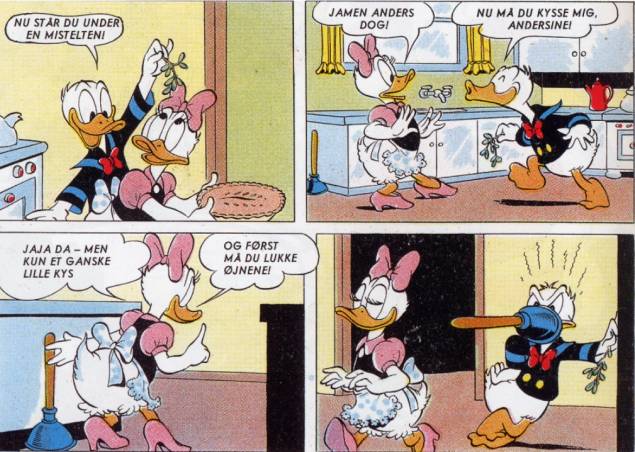 ..or a spare can of gasoline in the handbag when going on a nocturnal drive at Lovers’ Lane. 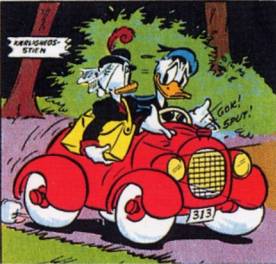 Indeed, Daisy could probably teach the boy scouts of the Junior Woodchucks (and even more so the girl scouts of the Chickadees) one or two things about the art of being prepared. It would, however, be very wrong to use these examples to claim a general lack of sexuality for Daisy. Certainly, Daisy too has her moments of feeling romantic. 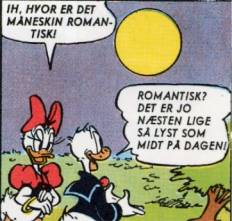 Sometimes even quite romantic and sexually inviting. 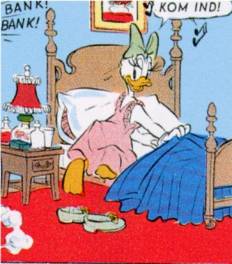 Unfortunately, when Daisy is broody and ready, Donald usually seems rather uninterested and focused on something else. One could of course explain this by bad hormonal timing, or a bad sense of humour among the cupids of Duckburg, both possibilities that I by no way will dismiss as unlikely, but there are also several signs of a general retreative reaction among males in the Duck family, when the courting appears to be going so well that the ultimate binding relationship is within sight. 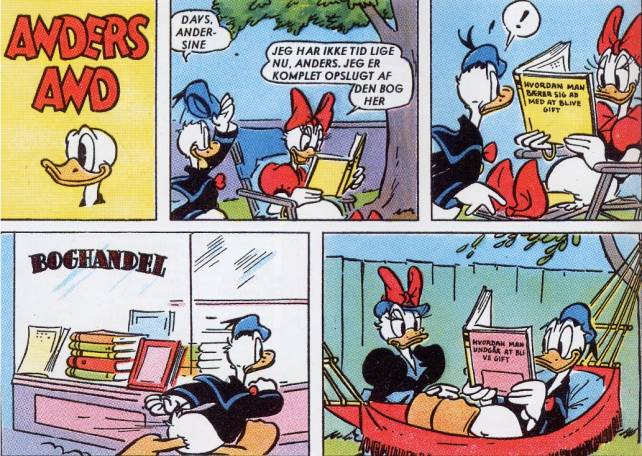 The thought of being married and have to stick with just one woman is apparently not at all appealing to the male Duck. Indeed, when the danger is on, and Anatide dames in heat are on the hunt, it is much safer to stay at home. For instance, in the company of a good book...